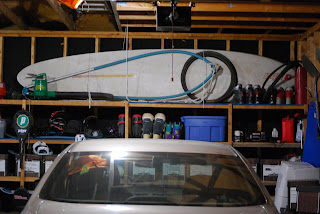 In the upper recesses of our garage, an ancient windsurfer presides.

It rests on the top shelf, tucked behind the leaf blower, an old bicycle tire, and tiny ski boots we’re holding onto for the grandkids. I think the grandkids may have actually outgrown the boots by now, but never mind. Project for another day.

The windsurfer stretches, oh, twelve feet in length, eating up precious storage space. (Yes, for those of you are compulsive organizers, you know what I’m saying. This thing belongs in the far reaches of the basement storage with other stuff we never use, not in this precious relatively-close-at-hand space.)

We wrestled the beast up there when we moved into this house in, um, June of 1995. It hasn’t moved since. We never so much as touch it, except to tighten the restraining cords when it occasionally slips down and threatens to decapitate someone. It is covered in a decade-and-a-half’s worth of grime, dust, cobwebs and mouse droppings.

I know what you’re thinking: I’m on the wrong page here. Clearly this item belongs on the Things I Give Away List, dear one, unless you’ve recently lost your marbles. Except, that it doesn’t. It’s not mine, you see. It belongs to my husband, and it is his memories, history and hopes that are pinned to this maiden of the lake, not mine.

There is hope pinned to that dusty old thing. A wish and a dream that he would teach our now fourteen-year-old daughter to windsurf. That’s still a possibility, of course, but with his eldest grandson having reached the magical age of five, the burden of my husband’s hope has fallen on his small shoulders. Frankly, I think Ben would rather, you know, play with his Playmobil carwash and monster trucks, but whom am I to say?

And that’s just it. It is not for me to say. This is where that first commandment of marital harmony comes into play: Keep Thy Mouth Shut. We have the room to store the thing. That’s not an issue. So what’s the problem here?

There is no problem. No problem at all. It is just stuff, after all.

This windsurfer predates my relationship with my husband, probably by a decade, at least. It was a pastime he shared with his first wife, and I’m okay with that. When you come second in the spousal line, you get used to these echoes of a former life – that’s true anyway, whether or not there was a previous marriage.

I was on this board exactly once, on Lake Temagami. I hopped on, full of the piss, vinegar and the stupid kind of confidence that only a twenty-four-old has, easily whipped downwind and then couldn’t get back. My husband and his former brother-in-law sallied forth in the powerboat and rescued me. The details of said rescue are foggy now. Come to think of it, I’m not even sure it was this board that I sailed off on. Never mind. This beat-up old relic can represent the memory, stand as an icon of a footloose stage in our relationship where I wasn’t perpetually mired in maternal worry about, oh, a zebra mussel cutting someone’s foot. If it is going to be sitting up there forever-more, I might as well infuse it with some kind of happy memory.