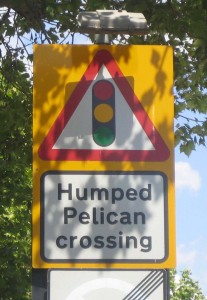 According to my highly unscientific research (i.e. Google): “A pelican crossing is just a normal pedestrian crossing with traffic lights and a green man.” I never did see the green man, but I did witness a spectacularly green woman, playing the lead role as Elphaba, the Witch of the West, in the West end production of Wicked. May I say that her singing voice was top-notch.

The citation goes on to say that a pelican crossing “contrasts with a zebra crossing where pedestrians have right of way and can just walk out and the cars will (theoretically) stop.” Uh-huh. I don’t think I’ll test out that theory any time soon. I’ve already had one too many close calls with motorized scooter drivers hepped up on Starbucks. Probably on their way zebra hunting.

The “humped” reference on the signage, in the case of either a pelican or a zebra, simply means “the crossing is just on top of a (wide) speed hump.” One has to wonder where the camels are in all of this.

Why is it that London sign language is in code?  The most sensible sign I saw all day was this: 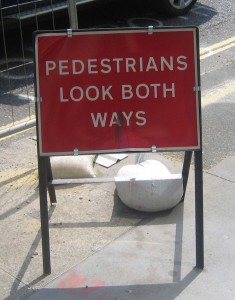 Hear me pedestrians: look and keep on looking! You’d be amazed at how fast one of those cherry-red double decker buses can appear from around a corner, especially when you’ve been trained since birth to expect traffic to come from the other direction.

Here’s another head-scratcher for pedestrians and drivers alike: 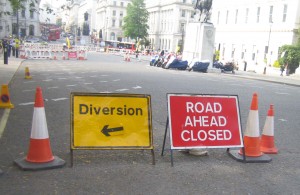 I had to stop and think when I saw this pair of signs. Is the driver expected to park the car, hop out and play with the pilon? Did Elphaba lose her hat? We never did solve it.

And since I’m on the topic of language, why are there so many silent syllables in British words? How is it that Leicester comes to sound like ‘Lester’, or Gloucester like “Gloster”. Don’t even ask me to pronounce Worcestershire (though I highly recommend it as a wonderful addition to most any kind of soup). Is there some mad syllable thief on the run in England? Or do the English just like to have one over on all the rest of us? Maybe just to, you know, one-up the French?  Moi, je ne sais pas.

Though England’s traffic rules, signage and spelling were a source of both mystery and merriment to us, we did find the host citizens to be the friendliest, most courteous and uniformly best-dressed of any country we’ve visited. Did I mention how well they dress? Be ye forewarned, dear pedestrian, if ye wish to purchase an ale: 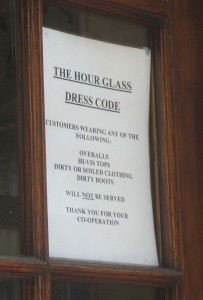 Leave the overalls at home.