When the Mole Hills Fail You… Expect a Rainbow 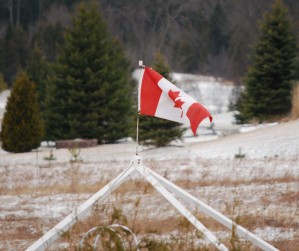 I was standing outside on my back deck this morning wearing my Nick-and-Nora pink pyjamas, the ones with the bemittened monkeys sliding down giant peppermint sticks. I was snapping photos of the mole hills poking out of the snow. This is April 18th in central Ontario, and we have snow, the unwelcome detritus of a spring blizzard. The snow had blown sideways, preceded by miniature hail, and before that, an icy rain. When the hail started in, I had ventured outside for a moment, fascinated; it had felt like all the angels in heaven were pelting me with tiny snowballs and laughing their heads off.

The odd juxtaposition of mole hills and spring snow had drawn me into the backyard, and though the pictures I took turned out flat and colourless, an idea broadsided me while I was standing there in my pink glory, a new insight into a legal issue I had been grappling with for three days. This happens: while I am feverishly focussed on the mole hills in front of me, an unexpected rainbow sneaks into my back pocket.

This reminded me of a speech Liz Gilbert made at TED. She speaks eloquently about the nature of creativity, of being available for it, of showing up for your part and letting it go when you can`t. She evokes the apparent randomness of creative inspiration, and its often rapid departure.

This also happens: on a Monday morning, while marching through scrambled eggs, dirty dishes and lunch bags waiting to be packed, several ideas came rushing at me. I jotted down notes on the back of a flyer, and then later, sitting in a grocery store parking lot, I scratched out a few more on an ATM envelope. That evening, I transcribed these scrawls into a document dutifully labelled “ideas for writing pieces“ intent on returning to them, when I had time. Problem was, when I did eventually return to them, the energy was gone, and my ideas were laying there lifeless on the page. Flat. Like the molehill pictures.

The same phenomenon happens in my day job. Much of what I do as a lawyer involves the careful crafting of words and arguments, and if those word come to me while I`m standing in the shower, well, I take dictation, if at all possible, and then get to a computer as fast as I can. In either case, I can always get the job done – I can always produce something- but, there is a difference to the energy of a piece of writing, legal or not, when I have been able to capture that creative rush and harness it.

Needless to say, this can create a bit of havoc in my life.

I end up on the back porch in my flamingly pink pyjamas in full view of my older next door neighbours, for instance.

“Hey Trev,” I imagine Ruth saying to her husband as she peers out the window at me. “Lisa is out on the porch again in her those crazy pyjamas. I wonder what the heck she is doing?

I turn toward Ruth and wave merrily to her. She waves back and raises her coffee cup. Cheers! I snap the lens cover back on the camera and head inside to my office. I will download this new inspiration before it escapes me, while I still have its tail in my teeth. Cheers! I couldn`t agree more.