Are You a Buddhist? Lawyers, Labels, Rituals and Me 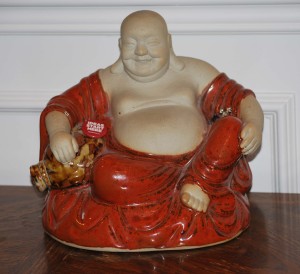 I recently spoke at a business conference for entrepreneurs about how to choose a business name. When I finished my short presentation, I put my hands together at my chest in prayer and bowed slightly to the audience. I didn’t plan to do this. The gesture was automatic, unconscious, surprising even me. Perhaps it was inspired by my years studying martial arts or having watched The Last Samurai one too many times. Maybe it was time spent in yoga and meditation classes. Whatever the source, the bow simply bubbled up: a gesture of thanks and of respect, never mind that I was in standing in front of a group of would-be business owners, most of whom were seriously revved up on caffeine.

No sooner had the morning panel finished, than one of my co-presenters approached me. A slight, energetic woman with tightly curled hair and a warm smile, she had spoken about social media strategy with palpable enthusiasm.

“Are you a Buddhist?” she asked, clearly pleased with the prospect.

I drew back from the question.

“I’ve never expected to see someone performing the Anjali Mudra at a business event,” she said. “Let alone a lawyer.”

She had me there. I’d never heard this gesture called the Anjali Mudra. I thought it was just, you know, Namaste.

“No, I’m not a Buddhist.”  I hesitated, then hastily added. “Though I have been studying Buddhist texts for many years.”

Because that just makes so much sense. I’m not a Buddhist, but I study Buddhism. Yes, that would be it.

Are you a Buddhist? I shrank away not because I don’t admire the Buddha – I most certainly do – but because I abhor labels of any kind.  Buddhist. Christian. Conservative. Liberal. Chocolate. Vanilla. The problem with labels is that they instantly create a boundary, a fence between neighbours, and not in a good way.

“I do sitting meditation every morning,” I offered.

“Oh, I do a thousand prostration every morning,” she replied.

Ritual, I thought. My other not-favourite-thing. But isn’t ritual the manifestation of commitment, discipline or even love? Sure. But, ritual can also be a means of pounding in those fenceposts.

And yet, I did it myself, didn’t I? With that unexpected bow?

It was most certainly my heart speaking, not my head. My head might well have slapped me and said “What on earth are you doing? These are business people you twit, not yoginis.”

Fortunately, I don’t listen too often to the voice in my head anymore. If I did, I wouldn’t meet nearly so many interesting people.

So, no, I wouldn’t call myself a Buddhist, even though my bookshelves carry at least three dozen volumes on the subject. For as much as I admire the Buddha – oh, let’s just call him by his simple lay-person name: Siddhartha Gautama. Knowing what he taught, I doubt he’d want me to call myself a Buddhist either. Siddhartha said it himself: Don’t believe what I say. Go out and test it. Decide for yourself. Even the Dalai Lama has said as much “You don’t have to be a Buddhist. Just be kind, be compassionate.”

Those are labels I’d slap on any day. And maybe that’s what the bow was: I see the Divine Light in you, and no, you don’t have to be in a martial arts dojo or a yoga studio for me to see it. It’s not a ritual, it’s a way of life.